Owner of the Dallas Cowboys

Book Jerry Jones for your Next Event

Jerry Jones is the owner, president and general manager of the Dallas Cowboys. Born in Los Angeles, California and raised in North Little Rock, Arkansas, Jones developed a great love of football during his days as a prep star at North Little Rock High School. He went on to serve as a co-captain on the University of Arkansas’ National Championship team in 1964, and earned All-Southwester Conference honors as an offensive lineman. Upon earning his college degree in 1965 he was hired as an executive vice president at Modern Security Life, and then earned his masters in business in 1970. After earning some experience in the business sector he began Jones Oil and Land Lease, which brought him unprecedented success. In 1989 he purchased the Cowboys for $140 million, and has since built them into “America’s Team”. One of the crown jewels of his Cowboy’s empire is AT&T Stadium, also known as “Jerry’s World”, which is a $1.3 billion stadium used for almost major sporting event at all levels of competition.

Book Jerry Jones for your Next Event

Disclaimer: AthleteSpeakers assists companies seeking to hire talent like Jerry Jones for speaking engagements, virtual meetings, appearances, product endorsements, and business sanctions. Our speakers bureau does not claim to exclusively represent Jerry Jones. Our booking agency can help with finding an athlete or sports celebrity that aligns with your upcoming events date, location, and budget. When an organization request booking details for a celebrity like Jerry Jones, we work closely with the client to make sure the proposed dates does not interfere with the requested athletes schedule. We then confirm the sports celebrity fee based on the details of the request. The fees listed on the speaker profile are rough estimates based on the previous market rate for the talent. Our team then works with Jerry Jones's agent, manager or assistant on the booking request. For parties interested in hiring Jerry Jones, we recommend filling out the booking request form so our booking agents can help with making your next event a success.

Interested in booking Jerry Jones for a virtual meeting?


Athlete Speakers is a leader when it comes to booking virtual events in the sports world. Since 1999, we have built close relationships with top athletes, agents, publicists and managers. We assist all types of companies as well as event planners with booking athletes like Jerry Jones for these virtual engagements. Companies continue to turn to Athlete Speakers to get Jerry Jones’s latest virtual speaking fee, appearance cost and schedule availability. 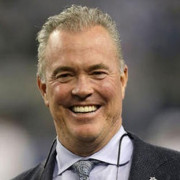